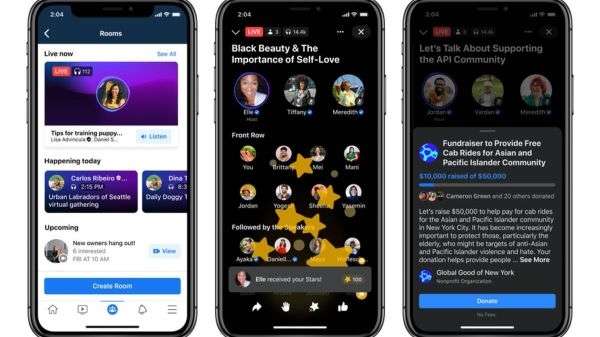 You must have heard about the Clubhouse app which is a conversion platform. Previously social media platform Twitter had rolled out service spaces with a feature like Clubhouse and now Facebook has also released a feature similar to Clubhouse. This audio based feature is named Live Audio Rooms.

Let us know that this new feature of Facebook will first be made available for groups and public figures. But later on for Messenger and general users too roll out Will be done. Although the concept of live audio rooms is largely clubhouse-like, some other features have also been added to it. Like here, users can record and send their conversion.

Facebook has also placed a subscription option for this feature. Users can make it paid. Explain that the way video creators create and post their videos, in the same way, audio creators will also be able to record and post audio records and earn money.

It will use small audio clips, which are named Soundbites. In simple words, it can be used as an audio tick-talk, just as small videos were uploaded on tick-talk. Explain that you will find the SoundBytes feature in the news feed.

Sound studio in your pocket

Facebook has named this feature Sound Studio in Your Pocket. Since now the focus of the people is shifting to audio and podcasts, it is expected that in the coming times Facebook Also can bring other features related to audio. Facebook CEO Mark Zuckerberg himself said that he likes audio more. They believed that you can multitask while listening to audio. Well, these features have not yet come for the common users but in a few months you will also be able to use this feature.

Get the latest technology news notifications